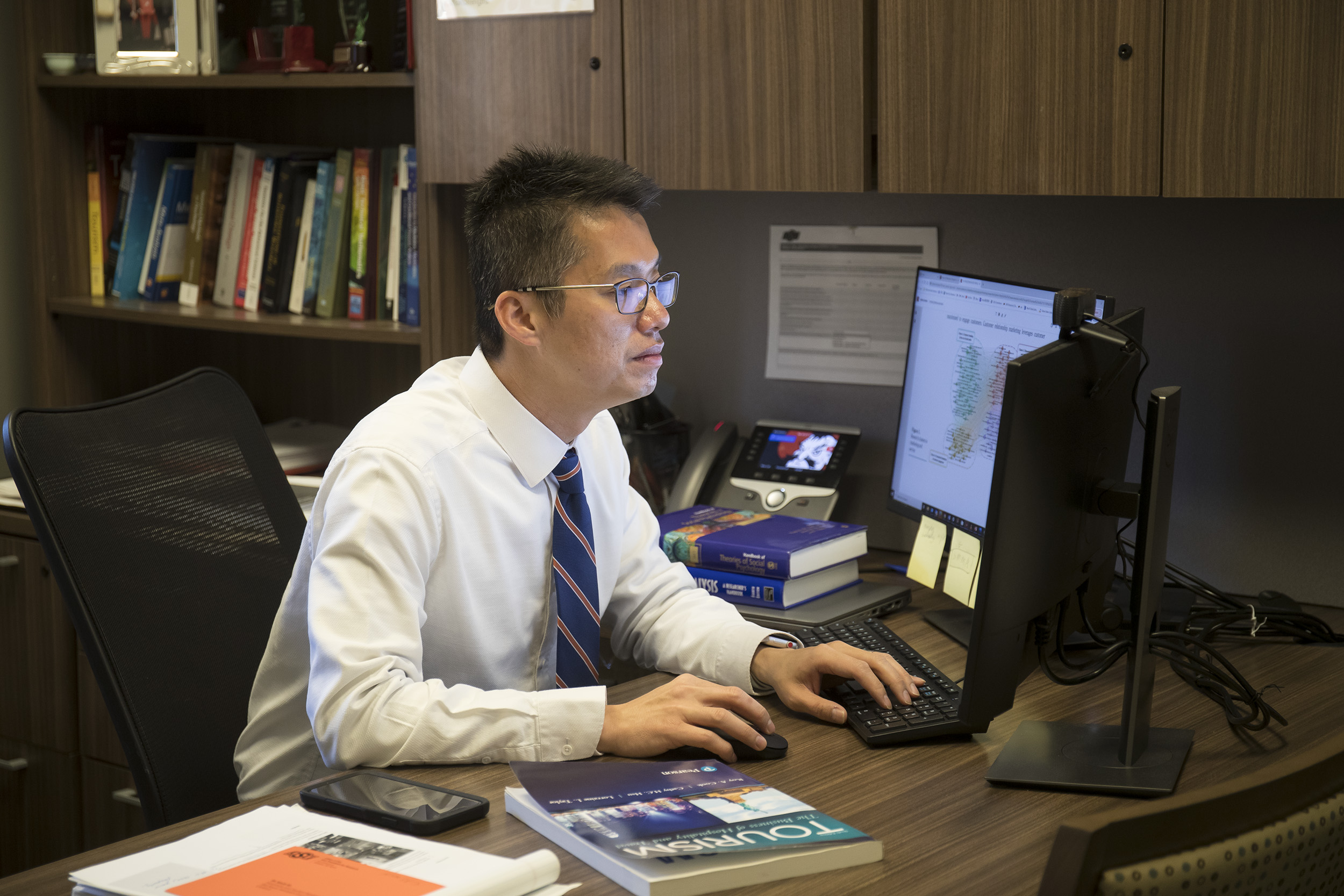 World Class: Kevin So’s research among most highly cited in

Dr. Kevin So is making waves in hospitality and tourism research.

So, the William E. Davis Professor and associate professor with the School of Hospitality and Tourism Management at Spears School of Business, was recognized as a breakthrough star with some of the most highly cited articles in his field and best papers among his awards and honors this year.

“Dr. So’s publications speak for his quality of work,” said Dr. Ramesh Sharda, vice
dean for graduate programs and research in Spears Business. “Most journals have an
acceptance rate of no more than 25%, and top-tier journals usually have an acceptance
rate of below 10%, which shows the competitive nature of faculty publications in top-tier
journals and he has been published in them numerous times.”

So was named on the 2021 Highly Cited Researchers list from Clarivate, a data and
analytics company. The list identifies researchers who produced multiple papers ranking
in the top one percent by citations for their chosen field or fields published between
January 2010 and December 2020, demonstrating significant influence among their peers.

This top one percent of the global research community represents magnets in their
respective disciplines with 6,600 researchers, representing 1,300-plus institutions
in more than 70 countries.

On the elite list, So is one of only 263 researchers in the world in the social sciences
discipline and one of only four Oklahoma State University professors to be included.

“Dr. So does high quality and prolific work,” Sharda said. “He is an extremely hard-working
colleague who focuses on both quantity and quality of work, which in turn creates
more highly cited work.”

So’s research accolades are possible because of extensive work in the hospitality
and tourism management field.

“For me, quality and impact are very important. No matter where I go, no matter which
institute I work at, those will always be the two indicators that are driving my research
efforts.”

Born in China and raised in Hong Kong, So pursued his undergraduate degree in business
management, majoring in hotel management from Griffith University in Australia, graduating
in 2009. Of the approximately 5,000 graduates, two students received the University
Medal and So was one of them. In 2010, he continued his graduate education in mathematical
sciences, majoring in statistics and statistical modeling at Queensland University
of Technology in Australia.

He was then awarded three full ride scholarships for his doctoral studies at Griffith,
the world-renowned hospitality and tourism management program where he graduated in
December 2013 with his Ph.D.

“When choosing my undergraduate major, I took the chance of reading introductory textbooks
from various business areas including accounting, finance, supply chain and logistics,”
So said. “When I started turning the first few pages of one of the best-selling hospitality
management textbooks, I was hooked. It is an industry full of excitement.”

After his educational endeavors and before entering academia, So gained extensive
industry knowledge in hotels and resorts throughout Australia. He then relocated to
the U.S. where he earned early tenure and early promotion at the University of South
Carolina. While there, he served as associate professor in the College of Hospitality,
Retail and Sport Management and as a research associate in the SmartState Center of
Economic Excellence in Tourism and Economic Development. In August 2020, he began
his career at OSU as an associate professor.

“I am passionate about conducting cutting-edge research that not only informs the
academic thinking of other scholars and students, but also provides compelling industry
insight into the world’s largest industry: tourism,” So said. “It is always intriguing
to me how consumers respond to and engage with different service companies and brands
differently. The dynamics of such interactions and what constitutes a superior and
memorable experience have always attracted my attention as a researcher.”

His main research focus lies at the intersection of hospitality and tourism marketing
and service management. Focusing on these industries as the contextual domain of his
research, he has concentrated on researching global consumer trends and their behavior,
with a special emphasis on customer engagement, platform business models, the sharing
economy, access-based services, artificial intelligence and service robots.

So was also recognized for having the No. 1 most highly cited paper from 2011–2021
published in the Journal of Hospitality and Tourism Research (JHTR), his 2014 article,
“Customer engagement with tourism brands: Scale development and validation.”

This article conceptualized consumer engagement through a 25-item scale, developed
from a survey of hotel and airline customers. The scale comprises five factors — identification,
enthusiasm, attention, absorption and interaction — which provides tourism practitioners
with insights into a customer’s psychological and behavioral connections with their
brand.

The three leading and most widely recognized sources provided the citation metrics
for this honor: Google Scholar, SCOPUS and Web of Science. Because the sources have
varying ways of quantifying publications, article numbers differ by source.

Google Scholar shows So’s article as being cited 561 times and ranks the article No.
1 of 748 articles published in JHTR in the last 10 years. According to SCOPUS, the
article is the top cited of 596 papers and has been cited 261 times. Of 610 articles
published, Web of Science also ranks the article as No. 1, with 234 citations.

The second most highly cited article across all three platforms was cited 100 fewer
times than So’s article.

Winning JHTR’s Best Article of the Year Award in 2015, this article has now been downloaded
more than 15,000 times based on the data from SAGE and ResearchGate.

Several articles that cited the 2014 article have now been referenced more than 500
times with one exceeding 1,000 citations. Of those articles, So’s 2016 paper, “The
role of customer engagement in building consumer loyalty to tourism brands” has been
cited 558 times.

“The number of citations and downloads are two important indicators of academic impact,”
So said. “It shows other researchers are using and reading our work.”

In the last academic year, So produced 15 publications and of those, 13 were accepted
into Spears college-level A journals.

The hospitality and tourism industry is an integral part of the U.S. and world economy
and its traditional consumption model is changing rapidly with the rise of platform-based
businesses, peer-to-peer consumption and the sharing economy.

These evolutions in the industry have created new questions from the consumer perspective
and service ecosystem perspective as well as in the minds of researchers. Some of
these questions include — how can we convince consumers such as older generations
who are apprehensive about using shared services to adopt a new way of thinking and
how does that affect actors in the existing ecosystem such as incumbents? Why are
they apprehensive? The increasing adoption of artificial intelligence and service
robots also presents new research questions. What services are consumers open to allowing
a service robot to provide for them? How do consumers perceive and evaluate the dynamic
situations of service failures resulting from service robots?

These are some of the questions So hopes to answer through his research.

Conducting this type of research is partially so impactful because of the industry
itself. Tourists who go out to dinner, use a ride-share service or stay in a hotel
are actively contributing to the hospitality and tourism industry.

So believes in order to be at the cutting edge of research, you have to identify where
the edge is by being at the forefront of the latest literature, as well as understanding
why that research is publishable and highly relevant to colleagues.

Therefore, he and his graduate students sit down regularly to discuss the latest published
paper to analyze research methodologies, what makes it impactful and why it is highly
relatable or cited.

“For me, quality and impact are very important,” So said. “No matter where I go, no
matter which institute I work at, those will always be the two indicators that fundamentally
drive my research efforts.

“When I work with my graduate students, I want to instill that notion in them. Focus
on quality and impact.”