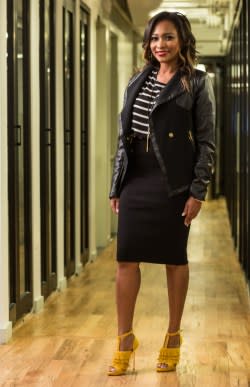 When Tiannia Barnes was working toward her bachelor’s degrees in math and engineering, and even her MBA, she never imagined she would one day end up featured in Vogue, showing at Fashion Week in Paris and New York City and designing shoes for a celebrity to wear to the Met Gala. But nevertheless, Barnes has done all of these things.

“That’s probably what keeps me going,” says Barnes (pictured below), who is the founder, CEO and designer behind her eponymous label. “I’m just now getting to a place where I’m starting to be in the moment and appreciate the moments for where I am. Because before, it was just like go, go, go, go, go.”

Barnes’ professional story starts at Siemens, where she worked in engineering. After a couple of years, she decided it was time for her to move into business consulting. It was just after she finished her MBA in 2012 that Barnes started considering a new avenue.

“I ended up saying, ‘Hey, I don’t know what this is about, but maybe I want to go and take a shoe design class.’ I didn’t want anything theoretical based. I clearly had three degrees. I did not want to go to school. I wasn’t that excited to go sit in a classroom and be educated on the evolution of shoes and the history of shoes, although that stuff is interesting. But at that time, I was really just like, ‘Oh, the creative part of it…Oh, I want to go make a shoe.’”

From there, she found a class in Cleveland that further sparked her interest in bringing her sketches to life. But the timing initially didn’t add up, so she waited a few months before flying out to take the classes, and what she got was a masterclass in making and selling shoes from the owner of a small privately owned manufacturing and distribution facility in Cleveland that teaches courses on the different aspects of shoemaking.

“[The owner] was like, ‘If you come in two weeks, I will have a private class for you, and I can teach you much more than just shoes-making. I can combine the three courses, the three services that I offer, into one class. That way, you will go through and do the patternmaking, go through the materials, actually putting the shoe together, building a whole prototype, and you’ll have that as your souvenir when you leave the class.’ I was like, ‘OK, great.’”

“Just two weeks later, in mid-December, I flew to Cleveland in the middle of a storm,” Barnes continued. “I spent the next four and a half days working very closely with her, like 12-, 16-hour days, and came away with a prototype, like hand-making; I was like a cobbler. That’s what I felt like for those four and a half days. It was just amazing. Now, I leave this class. I’ve built this pretty great relationship with this lady who has studied in London and in all these other fantastic places and has been in the industry for a very long time. At this point, she was more so teaching, had a couple private customers that she would make shoes for. That whole experience just really solidified that this was going to be my next step in life.”

It was in January of 2014 that Barnes wrote the business plan for her shoe company. From there, she formed her LLC and officially launched her company in September 2015.

“My business plan, it was like I already knew what it was and what I wanted to put in there,” Barnes says. “A lot of that stuff came naturally. It’s funny because, now that I’m in this business and I’ve talked to other designers, they find that to be the challenging piece and the design piece to be the easy piece. I’m like, ‘Oh, gosh. Setting up the business was the natural thing for me,’ but my background is very different than most designers, anyway…I used everything that I’d learned in my corporate world being a consultant, building high-performing teams to get a solution and deliver it. I used that model, honestly, in my own business.”

Since the launch of her first collection in 2015, Barnes has been off to races.

“[I] learned a lot of lessons in those first couple of years,” she says. “I did a lot of connecting with my customer. I did have some retail space in Soho with a store for about a year. That was good. Did Paris Fashion Week, New York Fashion Week. It was just really an exciting run and a lot of learning at the same time.”

And then, as Barnes was preparing to launch her latest collection, COVID happened.

“I was planning to launch this spring, but now we’ve had to rejigger some things because of COVID,” Barnes says. “My factories are in Italy, and Italy completely shut down. They actually just reopened in May. Right now, just doing a little bit of fine-tuning to make sure that this next collection really goes off without a hitch, the way that I want it to go off. I want to make sure that my customer base is already there waiting, pins and needles, waiting for this collection, so that it would really, really do well. I’m also expanding a new product within the business, as well. I’m really excited. It’s kind of like that whole excitement that I had four or five years ago building the business; I have that again this year. It just so ironically happens to be my fifth year anniversary in business. Now, I feel like, ‘Oh, this is even better,’ because I’m going to launch this pretty amazing collection. It’s merchandised. I have some of the dots connected. [There are] a few things that I still need to work through to get it to where I want it to be, but yeah, that’s how the evolution of Tiannia Barnes has happened.”

And while COVID has provided opportunities for Barnes’ company, she acknowledges that one of the challenges her business still faces is obtaining access to capital.

“The capital is interesting in fashion,” Barnes says. “I always see tons of tech-related application for capital, not so much in the beauty and fashion type of business, which I find…I guess, you find it odd, but you don’t. It’s people’s money, and they want to invest it in something that they definitely know they’re going to get a return on…I get it, but it’s just very challenging to find money outside of technology.”

“For me, I would think, in New York, you would have a little bit more of a consortium to pull from, and I haven’t found that,” Barnes continues. “And I’m involved in a lot of women’s organizations, et cetera, and I just have not found that. I don’t know what the true answer is, but I’ve also met a ton of designers, as well, and same thing. The fashion side of, not necessarily just the footwear, but everybody has problems getting access to capital.”

“To be honest, I can’t tell you right now if one is less than the other, but just talking to other people that are women of color, it’s just hard, across the board, for people of color, regardless. I think, and this is only my opinion. I think it’s just because we don’t have the connections,” she says. “I didn’t have a background in fashion, and I’m a pretty good networker. If we had a scale from 1 to 10 and someone asked about your resources and your connections, I’d probably be on the eight. And a lot of people of color may not be on that.”

“I just always believed in the power of network, so I go above and beyond in that space,” Barnes continues. “I try to, with the time that I do have. But I honestly think the answer to that is having the connections, having the access to the people that make decisions, having the access to know the top stylists in Hollywood and L.A. or in New York, that have A-list celebrity clientele, like…who’s the lady I love?” Barnes ponders for a moment, the celebrity’s name on the tip of her tongue.

“Oh, Blake. Blake Lively. That’s who it is…I think she always looks great,” Barnes goes on. “She looks fabulous with whatever she puts on. Tracee Ellis Ross, whatever she puts on, they just look fabulous. Those are the type of women that I would love to represent my brand and wear my shoes, but those are A-list celebrities, whether they’re women of color or not women of color. But to get to their stylist, it’s the assets game. Not all people have that type of connection.”

But amidst all of these challenges, Barnes isn’t slowing down, from making her way around Fashion Weeks in different cities and being one of the accessory designers-of-the-day on the Tamron Hall Show to being named one of Footwear News’ emerging designers to watch and collaborating with Gucci to dress TV personality Bevy Smith in a pair of custom-designed shoes for 2019’s Met Gala.

“Some pretty amazing things have happened, and I just feel really fortunate and blessed to be in this position and to only have been in the space for five years,” she says.

Barnes has had a whirlwind career in fashion so far, and she’s absolutely ready to introduce her customers to the next phase of Tiannia Barnes.

“My ultimate goal right now would be to launch this next collection and it sell out,” Barnes says. “That would make me extremely happy, because then I could go back into production and put out the rest of the product that I really, really want to put out, and I think that would solidify my brand. That would really solidify my brand to where I think it should be. For next year, I would really hope that my business has the capital that it needs to go into the next five years, to hit that next five-year mark, which would be 10 years of launching the Tiannia Barnes collection,” she continues. “I really want to have the capital to take it to the next level by next year.”

And while her company ramps up, she wants to make sure she enjoys the experience all the way through.

“For me, personal journey-wise, just being able to live in the moment and experience and be excited about the things that are happening. That’s my personal, just Tiannia, goal.”

The post How Shoe Designer Tiannia Barnes Went From Business Consulting to Showing at Fashion Week appeared first on Worth.