AT&T announced its earnings for Q2 2022 on July 21, delivering strong results for its core mobility business. Despite macroeconomic headwinds, AT&T was able to deliver strong net additions for both its postpaid and prepaid businesses, at 813,000 and 196,000 respectively. Service revenues were up 2% QoQ and about 5% YoY on the back of strong subscriber growth. Equipment revenues were down 8% QoQ, mainly due to spillover demand for the Apple iPhone 13 in Q1 2022 following a supply-demand imbalance in Q4 2021. But equipment revenues were up 7% YoY, suggesting no slowdown in consumer spending on devices despite the highest levels of inflation in 40 years. 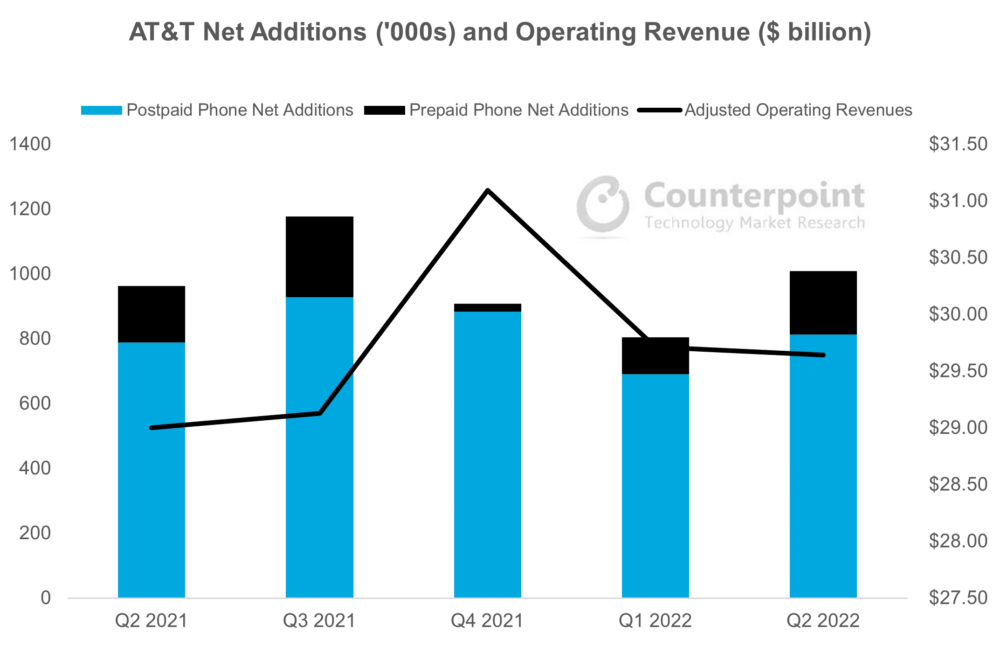 AT&T was able to manage strong net additions and minimal churn despite inflation-related price increases. During Q2, AT&T increased prices on single-line plans by $6 per month and on family plans by $12 per month, but this didn’t increase churn or drive customers to Verizon or T-Mobile. One reason for this is AT&T’s strong promotional lineup, which the operator suggested would remain stable in the second half of this year. AT&T offered up to $800 off the Samsung Galaxy S22 series with a trade-in of any Galaxy S-series or Note-series device, regardless of age and condition, as long as the customer chose an unlimited plan. A similar offer of up to $700 off with a trade-in and unlimited plan was available on the iPhone 13 series. For more information on model-level sales by channel, check out Counterpoint’s US Channel Share Tracker.

AT&T also continued seeing strong uptake for its fiber services with 316,000 net additions, which more than offset the decline in legacy internet services. AT&T’s total consumer fiber subscriber base increased to 6.6 million. The company maintains its plans to lay more fiber after already expanding its footprint by 2 million locations so far this year.

While AT&T reported strong performances for its mobility and fiber businesses, there were signs of weakness this quarter and on the horizon.  AT&T’s wireline business was a weak spot in the company’s performance, with its revenues declining 7.5% YoY. Besides, AT&T CEO John Stankey noted that the payment cycle was lengthening as prepaid customers struggle to pay their bills on time, a trend that tends to emerge amid economic hardship. The company also warned that it saw the macro environment souring in the second half of 2022 and into 2023. But Stankey remained confident that AT&T would be relatively insulated, noting that the low end of the market was more likely to be impacted by inflation and a possible recession.

Despite the relatively strong performance that AT&T managed during Q2, share prices were down over 9% following its earnings call, primarily due to a reduction in free cash flow guidance for 2022. AT&T managed only $1.4 billion in free cash flow for Q2, resulting in the company lowering its guidance from $16 billion for the full year to $14 billion. Free cash flow so far this year only amounts to $4.2 billion, meaning AT&T will need to manage an average of $5 billion per quarter for the rest of the year to meet its guidance. Free cash flow is being held back by high capital expenditures and vendor financing payments, which were up 32% and 38% respectively compared with the same period last year. High levels of capex are expected at least through the end of this year as AT&T ramps up its 5G C-band deployment and continues to lay fiber to more locations.

Follow these links for insights on T-Mobile and Verizon.